Joseph Dadoune, Universes CD, 1998-2003
Remainder Resident My Head Split (Guest: Riff Cohen, special mix for Worlds project) Joseph Dadoune is an Israeli/French artist and filmmaker. The musical pieces are part of a suggested journey into a parallel universe from his “Universes” CD. The artist slows down the original recording, and thus relates to the sounds and recorded phrases as raw materials, similar to organic materials. The distortion of sound creates an effect that recalls the conjuring of voices from the dead, from the depths of a vanished archive, in which personal confession and collective lamentation act in combination. The resulting musical collage creates a sense of mysterious, deep space, in which layers of past, present and future seem to collapse into each other. Curated by Drorit Gur-Arie, Israel 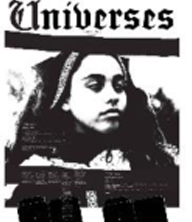